Marie Simmons
Lunch with a Legend

Marie Simmons is an American culinary treasure whose work over the last forty years has helped change the way Americans eat and view food. A top food writer, teacher and prolific cookbook author, she has been honored with two James Beard Awards and the Julia Child Award (the culinary equivalent of winning an Oscar®). Marie has authored scores of culinary articles and published three long-running columns including Cooking for Health for Bon Appetit magazine and Fresh & Fast, a syndicated newspaper column for the Los Angeles Times Syndicate. Her current column, Simmons Sez, appears in 14 Bay Area publications.

For those of us who love to cook and those that want to learn, Marie Simmons is the friend and guide we all wished we had next to us as we chop, slice, mix and stir. I was lucky enough to spend a couple of hours getting her perspective on everything from authorship to zucchini blossoms.

BA: Marie, food is “hot” in a way that it simply wasn’t 40 years ago…celebrity chefs, the Food Network, Food Channel and the like are all fairly recent arrivals on the cultural scene. Is this something that you anticipated at the start of your career?

MS: No. Food has always been a big part of my life. I come from a family that loved to cook—they loved food. Looking back, my grandmother, mother and aunts probably groomed me to earn a living from food. Not surprising because my father owned a restaurant.

BA: What one lesson learned from you grandmother and mother do you share regularly with your readers and students?

MS: My grandmother believed that one should spend their money on good food rather than a doctor. I grew up with that reasoning and it still guides me today.

My mother shopped at really good small stores where she knew the butcher and bought really good meat. We also always went to local farm stands for our produce. I’d come home from school to see bushels of tomatoes on the back porch.

BA: I’ll bet there were lots of tasty memories created on that porch. What’s your favorite?

MS: One of my great childhood memories is the fresh zucchini flowers that my mother fried in a little iron skillet. We’d sit on the back porch and eat them like potato chips.

BA: Did you ever know how lucky you were to live like this?

MS: You know what happens when you live and breathe good food? It is the norm and you’re not impressed. When I went off to college to study food and nutrition, I wanted to learn about French food. I wanted to make beef bourguignon, pate—things like that.  So I started learning them.

BA: Let me guess, Julia Child was a big influence on you.

MS:  Yes, Julia was a huge influence. When I was in college we all watched her shows. It was the “done” thing. We’d all gather around the television and watch her. Baby steps. It built my perspective.

BA: How did you break into the food world after you found Julia and graduated from college?

MS: I started my career as a test kitchen editor at Woman’s Day magazine, which you can still find in supermarkets today. That was back in the 60’s—43 years ago. It was a perfect training ground because I worked with real pros. The old-time home economists really knew the basics of cooking. They were good, really good people and I learned a lot from them.

BA: Did anyone mentor you like the women in your family?

MS: Yes! I had a really flamboyant editor who took me under her wing. One of my jobs was to cook for Jim Beard—James Beard—he and the food editor were best friends. He would come for lunch and as the low person on the totem pole, it was my job to make lunch for them.

BA: What did you think when you met this culinary icon in the flesh?

MS: I wasn’t really that impressed. I knew who he was, but I was spunky. Years later I had to make a dessert for Julia Child—maybe 20 years later—and I remember being much more intimidated by that than James Beard in my 20’s. The more you know, the more intimidating it is. I didn’t know—and I really loved it.

BA: After Woman’s Day, you became the senior food editor at Cuisine magazine. What was it like working with the top chefs and culinary personalities of the time and being part of the evolving food culture?

MS: I really got to flex my muscles there. The thing about Cuisine was that it was not snobbish at all. I was always able to balance being impressed with food and knowing that it’s only food.

We did a lot of ethnic food at Cuisine, so I learned about the really important people. I learned about Indian, Chinese and Italian food. Although my family is Italian—southern Italian, I learned about Marcella Hazen and about classic food. During that time I worked with the wonderful people making their mark in the 1970’s: Jacque Pepin, Richard Sax, Burt Greene and Madeline Kamman.

BA: How did you work with everyone when they were obviously spread all over the planet? There was no SKYPE, email or cells; just snail mail and telephones.

MS: I was the senior food editor so when we tested their recipes, I’d just pick up the phone and call.  Paula Wolford was a contributor and lived in southwestern France. She taught me all about confit on the phone.  It was a fabulous time! If the magazine had not folded, I’d probably still be there.

BA: You’re such a prolific cookbook author—over 20 books with a new vegetarian cookbook coming this spring—when did you start developing and writing them?

MS: When Cuisine was over, there wasn’t anywhere to go. All those people I mentioned encouraged me to start working on books so I did. I just followed my passion.

BA: How do you choose your book topics?

MS: I prefer single subjects that evolve from what I’m doing at home—eggs, figs, rice. I like to get into a subject and explore every possible implication of it.

I did The Good Egg because I adore eggs. The two rice books came about when I wanted to perfect my dishes. Now, I’m a pretty good cook, but it became apparent that my rice wasn’t up to par—and I was determined to get a handle on it.

BA:  What do you believe makes the vegetarian topic relevant for today’s audience?

MS:  We’re eating vegetarian more and more at home, although we are not vegetarians.

One of the main reasons I did the book was to show cooks how to pull vegetarian meals together—not just one recipe but a meal with accompaniments. This book is filled with food that you can make every day.

BA: The “foodie lifestyle” is bigger than ever… yet at the same time, many claim that Americans are simply too busy to cook these days. Fast food, take-out and frozen dinners are the norm. As a cookbook author, you clearly believe that home cooking is alive and well. Why do you think that is?

MS: Home cooking is alive and well because it’s coming back. People are becoming aware of something basic that I was raised with; good food and health go hand-in-hand. That’s very important. People realize that in order to keep their families healthy they must cook with good ingredients. They are not necessarily going to get that in prepared foods. You’ll get too much sodium or too many additives. You don’t really know what’s in your food.

BA: Marie, you’ve lived in both New York and California—both great culinary capitals—but your work takes you all around the country regularly. Do you have any regional insights into how America eats and thinks about food today?

MS: Farmers markets are getting very big. California is the real mecca. We get the most astonishing produce so many months of the year when people in other parts of the country can’t. I’ve seen some parts of the country where the produce is really sad. They don’t get what they deserve. That’s why I like to travel and teach cooking classes. It’s a chance to tell people they don’t have to put up with bad produce; they can become a wise consumer, a crusader. It’s a chance to empower them. Many don’t know that they can ask, and if markets turn a deaf ear then so be it. Meanwhile cities like Portland have great farmer’s markets. It’s hopeful.

People want to eat better and come to learn how to cook well. While we love our fast food in this country, we writers and teachers are raising the collective consciousness. Even mainstream restaurants are working on their menus.

BA: You were a pioneer in your early career, but today, thousands of ambitious young people aspire to work in culinary media. What might they learn from your successes?

MS: My career has been an accident, a lovely accident. I have a tendency to see an opportunity, realize its value and go for it. Some things pass me by because they don’t interest me. Maybe on some level it’s meditative—not premeditated. I get excited about opportunity—really excited. I always do things to my own beat. 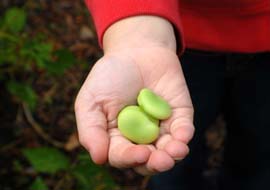 When five-year old Sammy was just three, we planted a giant clay pot with winter greens that became his special garden. He learned that plants eat and drink through their hairy little roots and require lots of tender loving care to flourish.
Read More...
Pull up a chair for my new series! 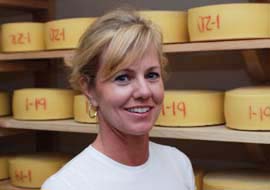 As a food writer and publisher, I live and breathe food; it is my passion. So I've always appreciated the special quality of local, farm-fresh produce and lovingly handcrafted foods.
Read More...
Marie Simmons:Lunch with a Legend 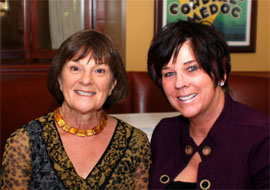 Marie Simmons is an American culinary treasure whose work over the last forty years has helped change the way Americans eat and view food.
Read More...