Some adventurous souls are born chefs; a few are also gifted with the ability to teach and inspire others in the kitchen. Earlier this week James Peterson, the award-winning cookbook author, chef and master teacher of culinary arts came to town. He was here promoting Cooking, his 12th book. I caught up with him at the Book Passage Cooks with Books dinner at the popular Left Bank restaurant.

Peterson arrived early and mingled with the gathering guests. Windsor Andersen and I were sipping our wine when he noticed that I’d brought Sauces, one of his earlier works, for signing. As we chatted he did the honors. A number of his family members and good friends arrived and greeted him warmly. We learned that he grew up nearby before settling in New York.

Guests lined up to get their copies of Cooking signed, then enjoyed a dinner prepared from recipes in the book. All of these events have their own personalities, and this one felt almost like a big family gathering with Peterson moving about the room talking with guests, answering questions and relating stories from his travels and work.

When the appetizers arrived, Peterson told me that the cool, fresh oysters on the half shell with warm saffron hollandaise sauce are one of his personal favorites. I agreed they were sensational—and that says a lot coming from someone who has avoided these little critters for most of my life. I had my first oyster only last year at the Drakes Bay Oyster Company, and consider myself a bit of a novice in their preparation. But after tasting Peterson’s wonderful dish and reviewing the recipe and excellent step-by-step illustrations in his book, I’m inspired to try making a batch at home.

I knew that Peterson began as a self-taught cook, then built his skills at the Cordon Bleu in Paris and in the kitchens of French restaurants. I was curious when and how he began cooking. He laughed and said he was ten years old and convinced a favorite aunt to help him make crepes suzette. Ambitious from the start, he figured it would be easy. How hard could it be to fry the thin pancakes and make a sauce that required one to rub oranges with sugar cubes to extract the essence of the zest? They had a few problems on that first effort, but Peterson was hooked. Today, crepes suzette is included in Cooking for all to make with confidence and success.

The meal continued to celebrate the season with a wonderful artichoke and toasted walnut salad and a beautifully flavored spring lamb stew. Dessert was three decadent cream puffs with a dark chocolate sauce. Windsor told Peterson that this was the best dessert she’d ever had at Cooks with Books, and he let her know that the sauce was a last-minute addition. He just thought it was a better treat than powdered sugar. Wiping a bit of sauce from her chin, Windsor had to agree.

Get a printable copy of James Peterson’s Spring Lamb Stew.

Gather a group of foodies and chefs together for a meal and the topic is always food: ingredients, recipes, war stories and tools. When award […]

Spend an evening with celebrated chef and prolific writer Joyce Goldstein and you’ll see why she is known as the American master of Mediterranean cuisine. […] 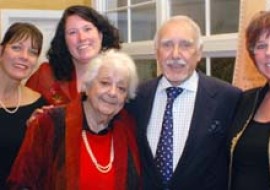 In the early 1970’s, Marcella Hazan was busy working on The Classic Italian Cook Book—her first of six books that would change the way Americans […]

Last Sunday, photographer Windsor Andersen and I headed to the Boulevard restaurant in San Francisco to cover the Cooks with Books luncheon for culinary icon, […]