Carefree in the BreezePicnic Season is Here!

I love picnics! Whether it’s a solo morning hike in the fog-shrouded hills with a thermos of coffee and muffins, or more elaborate fare shared with family and friends, I’m always game. So when the kids wanted to take our seventeen-year-old houseguest, Mahi Titus, kite flying on the shores below the Golden Gate Bridge, I sprang into action.

Mahi is from New Delhi, India and had come to spend a few days with us before heading to the Global Young Leaders Conference in Washington DC and a United Nations event in New York City. We’d done a whirlwind tour of Chinatown, Fisherman’s Wharf, North Beach, and snaked her down Lombard “the crookest street in the world”. Our kite-flying destination offered a breathtaking view and the perfect winds to get our dragon kites airborne.

My three rules of picnicking are easy, easy and easy. So lunch was lots of sliced cold cuts, cheeses, pickles, black olives, munchies and cold drinks. For dessert, I packed up a platter of freshly baked chocolate Guinness cupcakes that I’d just finished testing for the website that morning. We also had a large, crab-shaped sourdough bread from Fisherman’s Wharf, whose claws would make fun sandwiches.

As the kids worked together on the kites, I set a big checked tablecloth with bright plastic plates and piled on the food. I couldn’t resist licking a bit of chocolate-cinnamon buttercream off my fingers as I arranged the cupcakes. One taste settled it—the kids could have the meats and cheeses; my lunch would be several of these decadent treats!

The kites provided plenty of drama—particularly for little Sammy, who wailed in distress as the green dragon crashed on the rocks. Fortunately, his sunny mood was easily restored by a huge supply of black olives. He fitted an olive on each tiny finger and cried out happily, “look, I’m an alien!” As the olives disappeared into his mouth, we all agreed that he looked more like a chipmunk.

As I savored my second (alright, third) cupcake, I reflected on the incredible power of simple food in a beautiful outdoor setting, shared with people I love. It’s what summer is all about.

Favorite Cocktails!
My Kitchen Runneth Over! Making the Most of Peak-Season Abundance 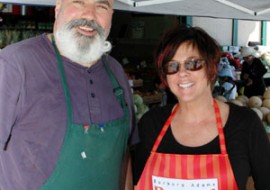 Early one morning with strong black coffee in hand, I stood surveying my small kitchen. Filled with boxes of produce, herbs and supplies from an […]

Saturday was a spectacular, clear San Francisco day so I headed across the Golden Gate Bridge to Fisherman’s Wharf for fresh local Dungeness crab […]

Cheers to the San Francisco fishermen who braved bad weather and high waves to deliver fresh Dungeness crabs to our Bay Area markets this week. […] 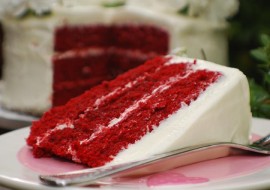 As a child, I thrilled to red and pink paper hearts, inscribed with simple words of love. Today, I give the three-dimensional, edible kind: heart-shaped […]