Imagine a sari-clad north Indian village woman making fresh chapattis for her family over an open fire, as generations have done before her. Now fast forward to a crowded, urban center like New Delhi where cooks everywhere prepare this protein-rich unleavened bread daily. At Leela Manilal’s table, her large boisterous family enjoys a seemingly endless supply of just-off-the-fire chapattis served by Niranjan, the family cook, and his wife, Kamla. Simple perfection—and something I wanted to learn.

In the beginning, the appeal of these healthy, beautifully round and thin chapattis was lost on me. Truthfully, I could take or leave them until I discovered that when torn into smaller pieces they make great shovels for scooping up my favorite curries, dals, and rice with bits of stuffed red chili pepper pickle.

At breakfast one morning, Leela made my day by announcing that Kamla—our resident master chapatti maker—would teach me how to make the breads later that afternoon. “Barbara, you’ll be using my copper pan that once belonged to my mother-in-law—it’s over 100-years old. She gave it to me years ago and it has supplied us all with thousands of chapattis over the years. Now you’ll be part of its history.” I was humbled and couldn’t wait to begin. 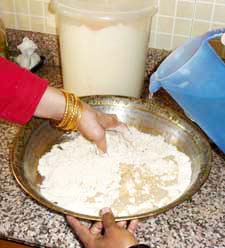 In the kitchen, Kamla collected our ingredients—a tub of atta flour (“atta” is the Hindi word for high protein durum wheat, similar to that used in pasta), salt and a pitcher of water that she placed on the marble countertop. Speaking Hindi, she motioned me to scoop about two cups of atta and some salt into the pan. Kamla poured just enough water into the mixture to start forming the dough. I thought it a bit dry, so she sprinkled some more water over the top and showed me how to work the mixture effectively using just one hand. Once I achieved a “kneadable” consistency, Kamla dusted a bit of flour onto the counter and had me knead the dough for several minutes until smooth. She placed it back in the pan and covered it to rest for 20–30 minutes.

Throughout my lesson, Leela and various family members came to see how I was doing. Leela told me said that resting the dough is a critical step. “If you skip it you’ll produce tough and inferior chapattis, and that’s no good.” I’d made it through dough making 101; soon it was time to get rolling—literally. 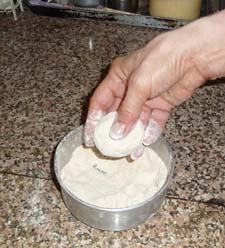 Kamla broke off two pieces of dough approximately 1 ¾ inches in diameter and handed me one. She rolled her dough between the palms of her hands until smooth, then flattened it slightly into a perfect fat circle. Finally, she dipped the dough in atta to prevent stickiness. I followed her lead and was soon ready for the next step—rolling the dough flat.

I sprinkled some atta on the counter and dusted the rolling pin. Kamla wielded the pin first, and within seconds she had a perfectly round, flat chapatti. I was impressed.

Now it was my turn, so I gripped the rolling pin with eager fingers. “Nay, nay.” (“No, no” in Hindi.) She adjusted my fingers outward and showed how I must keep my hands loose, letting my fingertips do all of the work rolling and turning. This is not as easy as it looks, and my chapatti looked more like the Indian sub-continent that the perfect circle I desired.

Leela came up behind me and took a look at what was shaping up to be a thickish, glandular-looking creation. “Pretty good for a first attempt.” Then she laughed wickedly and said, “It’s a good thing that you’re not a new bride, because Indian mother-in-laws have been known to give them a good smack when they lacked good chapatti-making skills.” Very funny. “Keep it up and you’ll have it down in no time,” she chuckled.

It was time to cook my imperfect chapatti so Kamla quickly heated an Indian tava (a slightly concave griddle used to make flatbreads) over medium heat. I place the chapatti in the center and cooked it briefly, then flipped it to finish.

As I pulled it off the tava, Kamla handed me a clean kitchen towel to press and seal the edges, ensuring that the bread would puff properly in the next stage of cooking.

My favorite part of the chapatti-making process occurs when you place the bread on an open flame and it fills with steam and puffs like a balloon. I was so pleased watching mine that it started to burn. Sacre bleu! (Or whatever they say in Hindi.) I didn’t come this far to have it catch fire, so I turned it quickly and tried to keep it moving in a circular motion as Kamla had demonstrated. When finished, it was a chapatti only its maker could be proud of. But I kept at it and produced five or six more that improved with each attempt. Thank goodness!

I’m someone who’s always trying new things, so I know that developing a new skill, no matter how simple, takes practice, practice, practice. My first chapatti may have been ugly but my current ones are quite good. Maybe even good enough for an Indian mother-in-law.

Print a copy my Chapatti recipe or illustrated, step-by-step How To Make Chapattis for your convenience. 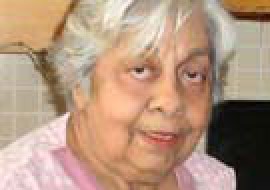 If I say, “curry” what comes to mind first? Chicken. Maybe lamb or a spicy fish dish. But how about cheese? Huh? Vegetarians and carnivores […]

Oh, but it’s smelling really good in my kitchen today. Come on in and meet my great friend, Leela Manilal who’s here from New Delhi, […]

Give me a plate of Chef Gianni Audieri’s gnocchi with a glass of wine and I’m a very happy lady. So when Gianni offered to […]

Mama Rita Ferro’s kitchen is a great place to be. It’s always filled with amazing Italian food, family, friends, and her joyful spirit that guarantees […]

Escalating food prices during tough economic times can make it difficult to feed a family, let alone entertain or eat out as in more prosperous […]