Love those fat little tummies. Mmmm. Nibble those tiny feet and bite off their spicy gingerbread heads. Dark, moist ginger babies are irresistible and the perfect holiday baking project for kids of all ages.

Santa’s impending arrival has the kids in my family bouncing off the wall so I keep them busy in the kitchen making memories. Sammy, five, loves to cook and got right into mixing and stirring the batter. As I measured the spices and flavorings, he adventurously sniffed each and discovered to his chagrin that individually, cinnamon, nutmeg, ginger, cloves and cardamom are bitter and don’t always smell good. Black pepper makes him sneeze. Worst of all molasses—the one ingredient that makes gingerbread divine—was pronounced “sninky… yucky… disgusting!” Imagine his delight when he realized that mixed up into batter, everything tastes “amazing!” and fills the kitchen with the sweet smells of Christmas that he knows and loves.

Pouring the spicy batter into the molds can be tricky; little kids are hilarious with their tongues hanging out of the sides of their mouths in deep concentration. Sammy carefully filled several dozen molds and proudly passed them to me—”ta-dah.”

The little chefs proudly showed off their masterpieces, then settled by the fire with hot chocolate and treats, giggling as they bit off spicy gingerbread toes and heads. Could live be any sweeter?

Print copies of Ginger Babies and Buttercream Frosting for your convenience.

Strawberries are in season so Jackson and I headed to the local berry farm to pick enough for shortcake and a good stash of popsicles. […]

Read More...
A Garden to Grow On

Late last September Sammy and I went to our local nursery in search of winter greens and herbs for my kitchen garden. He ran about […]

A perfect blend of spicy ginger, bright lemon and oh-so-cool cream. Go ahead and try to eat just one! 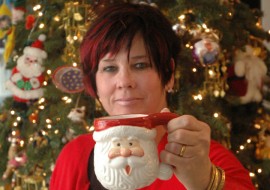